A Guide to Buying Your Buick

There are many Buick models at Buick car dealerships, so you're sure to find what you want by using this handy guide.

A Guide to Buick Car Sales 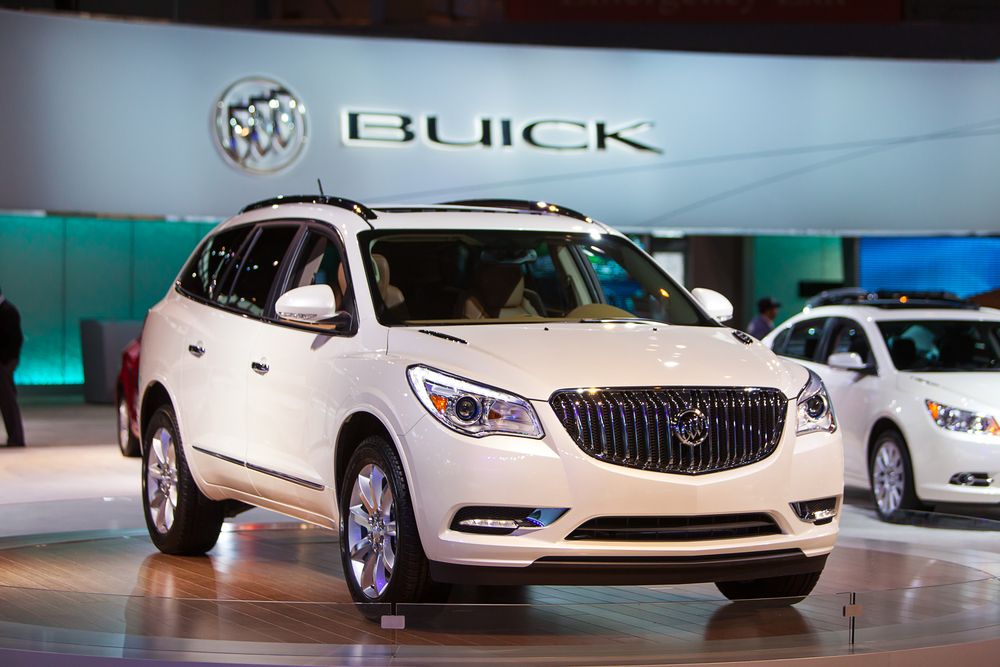 If you've decided that a Buick is right for you, looking at local Buick car sales is an easy way to find just what you're looking for.

The Enclave is a great SUV that starts at $39,065. It seats seven or eight passengers and has five trim levels. The top features the Buick Enclave offers are 4G LTE connectivity and a Wi-Fi hotspot, forward collision alert, front or all-wheel drive and standard airbags. The SUV gets up to 18 mpg and offers you plenty of cargo room and a variety of seat configurations for improved cargo space. Optional upgrades include heated seats, a heated steering wheel, a navigation system, blind spot warning, lane departure warning and forward collision warning. The Enclave gets an overall five out of five stars for safety and four out of five stars for rollover potential.

Most Buick car sales will include the LaCrosse, which is a 4-door sedan that seats up to five passengers and starts at $31,065. The Buick LaCrosse comes in eight available trim levels, so you have plenty of options. Depending on the engine size you choose, you can get up to 23 mpg on the highway. Your choices include a V6 or four-cylinder power train engine. The LaCrosse comes standard with four-wheel drive, but you can upgrade to all-wheel drive with the V6 engine. The car comes with Apple CarPlay or Android Auto capability, OnStar, 4G LTE connectivity and a Wi-Fi hotspot, a remote start, and a digital instrument panel. The Buick LaCrosse gets an overall safety rating of five out of five stars and is a great car for families. 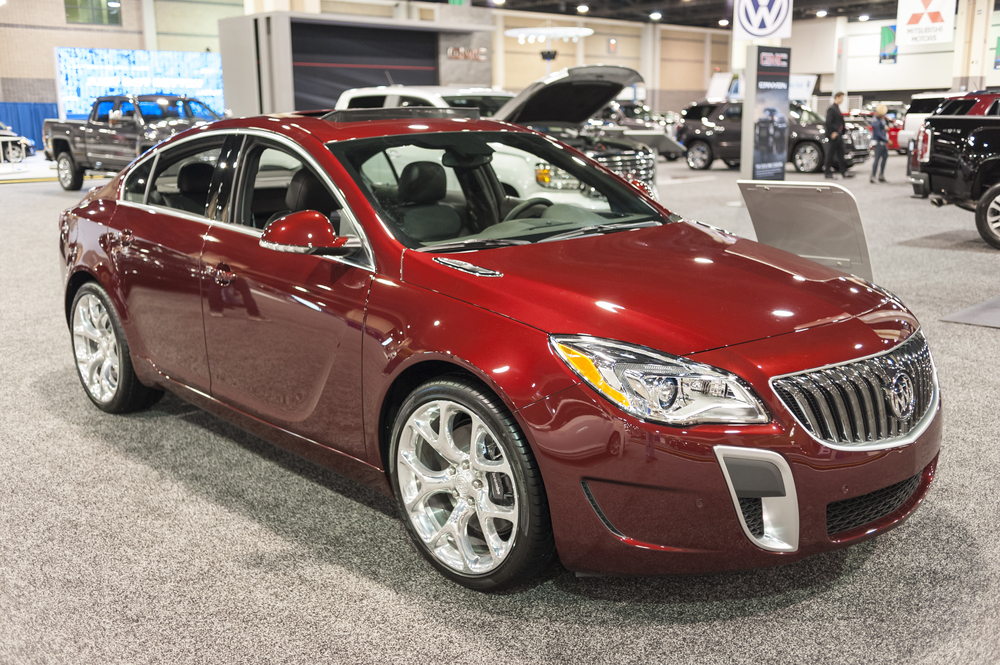 Most Buick car dealerships will offer this four-door sedan that seats up to five passengers. The Regal gets a respectable fuel economy with up to 25 mpg on the highway. The Buick Regal comes in eight available trim levels that allow you to get all the features you need and want. The car starts at $27,065, which is more affordable than many other sedans on the road. You get what you pay for in the form of a sporty look, your choice of three drive trains and a mild hybrid system. The car comes with four-wheel drive standard with the option of upgrading to all-wheel drive. The Regal comes with front collision warning, an available GS model for improved performance and an available turbocharged engine. You can also get 4G LTE technology and a Wi-Fi hotspot. The Buick Regal consistently gets top safety ratings, making it a good choice for families.

If you're looking for something a bit more sporty, this convertible should fit the bill just right. The Buick Cascada starts at $33,065 and seats up to four passengers. Because it's a smaller car, you can expect to get up to 23 mpg, making it a decent choice for fuel economy. The car has two doors and a folding roof that you can put up or down. The Cascada is based on a European model, which lends it sophistication and class. The convertible comes with front-wheel drive, automatic deploying rollover bars, and a quick speed for raising or lowering the top. There are two trim levels available that include upgrades. The car gets decent safety ratings and is a fun choice for singles or couples who don't need a lot of cargo or passenger space.

Here's an SUV that starts at $34,065 and seats up to five passengers. The Envision is available in 7 trim levels and gets a combined fuel economy of up to 25 mpg, making it a pretty good choice for an SUV. This vehicle is billed as a compact luxury SUV, so you can expect plenty of comfort and a smooth ride. The Envision comes with standard all-wheel drive and an 8-inch touchscreen with USB ports. The SUV has a turbo engine that optimizes acceleration and has a good amount of legroom in the backseat. The Buick Envision gets an overall safety rating of five out of five stars. 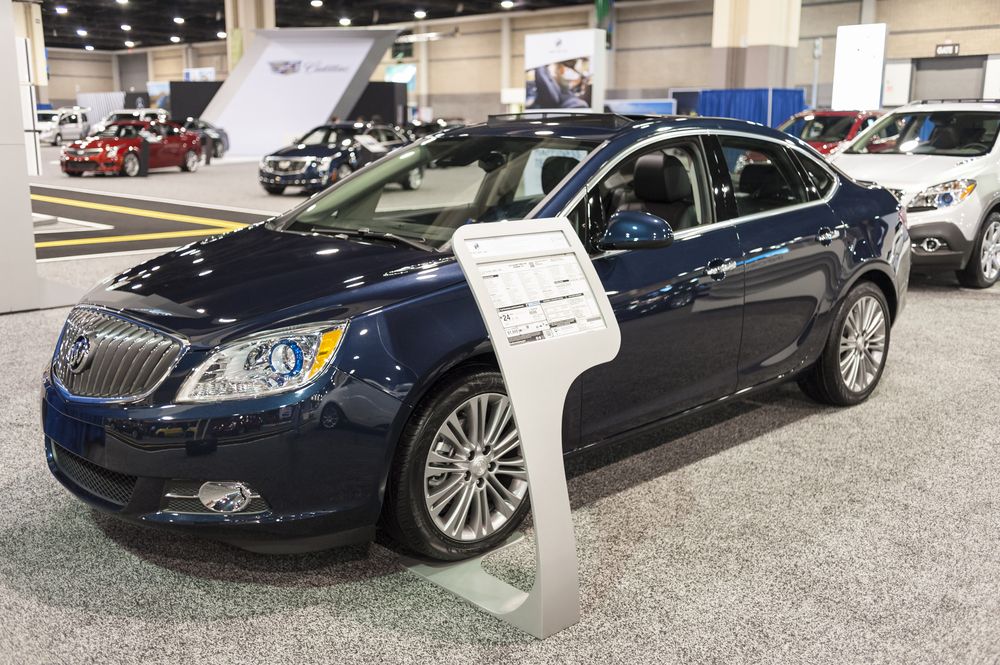 The Buick Verano is a four-door sedan that seats up to five passengers and starts at $21,065 with five trim levels available. The car features plenty of luxury and good looks with its blue-tinted projector beam headlights and chrome waterfall grille. The car has OnStar 4G LTE and Wi-Fi hotspot capabilities, forward collision alert and lane departure warning. You can also get a turbo engine with manual transmission and a heated steering wheel. The Buick Verano has high revving power, a luxurious interior, a quiet ride, loads of trunk space and smartphone integration capabilities. The overall safety rating of the Buick Verano is an impressive five out of five stars. This is a fun choice for couples or small families because it's sporty, fun to drive and safe.

The Buick Encore is a crossover SUV that starts at $23,915 and can seat up to five passengers. Choose from two engines, the more powerful of which increases horsepower and acceleration. The Encore gets up to 33 mpg on the highway and has a top speed of 123 mph. The SUV has a 6-speed automatic transmission and can accelerate to 60 mph in just over 7 seconds. The Encore gets consistently high safety ratings and has plenty of options when it comes to technology, including a touchscreen, Wi-Fi and smartphone integration capabilities. When you want function, space, room to haul cargo, luxury and plenty of upgrade options, you can never go wrong by choosing the Buick Encore. 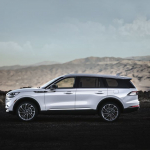 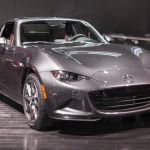